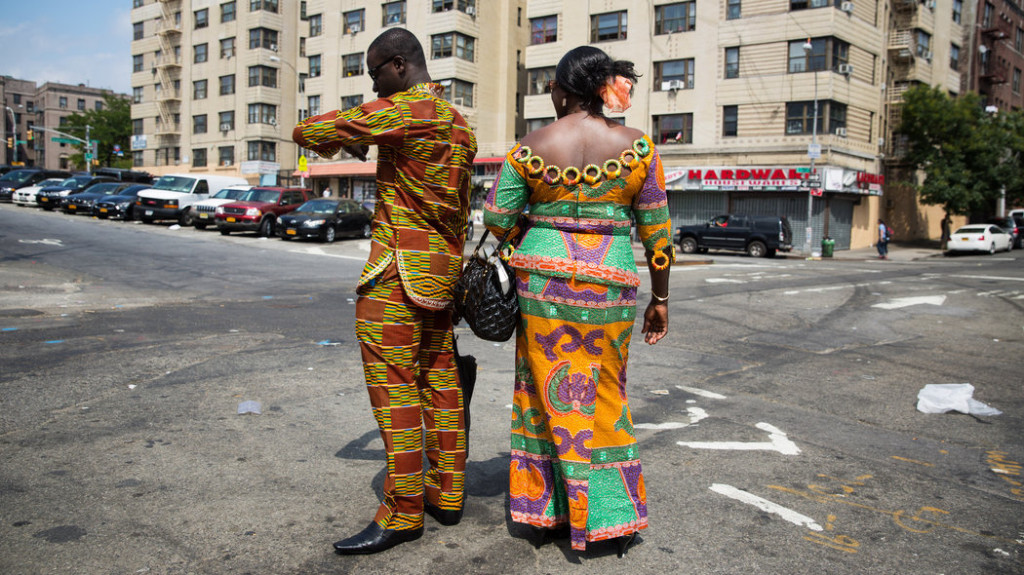 With educational and professional opportunities in Gambia scarce for his generation, “the rest will have to find ways of leaving,” he said, “and African migrants here, just as previous migrants, are likely not going to return to their countries of origin.”

Niat Amare, 28, graduated from law school in Ethiopia where she grew up, she recalled, “watching the media portray the U.S. as the land of opportunities.” She arrived here in 2010, lives in Harlem and said she felt welcome in New York. “Anyone would find one’s countryman here, which eases the strange feeling we all have the first time we leave home,” said Ms. Amare, a legal advocate for the African Services Committee, a nonprofit organization that assists new immigrants.

Lamin F. Bojang with his son, Ebrahim Bah, at his home in the Bronx.CreditDamon Winter/The New York Times

While the migration of black Africans is not new, the number of sub-Saharan immigrants has grown swiftly, an influx that is shifting the demographic landscape across the country, including in New York City.

Between 2000 and 2010, the number of legal black African immigrants in the United States about doubled, to around one million. During that single decade, according to the most reliable estimates, more black Africans arrived in this country on their own than were imported directly to North America during the more than three centuries of the slave trade.

And while New York State is home to the largest proportion and many have gravitated to ethnic enclaves like Little Senegal in West Harlem or the Concourse Village section of the West Bronx, to live among fellow Ghanaians, black immigrants from Africa have tended to disperse more widely across the country — to California, Florida, Georgia, Illinois, Maryland, Texas and Virginia — than Caribbean-born blacks.

About a third of black New Yorkers were born abroad, mostly in the Caribbean. Africans constitute about 4 percent of the city’s foreign-born population, but as much as 10 percent in the Bronx. At last count, according to an analysis of census estimates by the Department of City Planning, from 2000 to 2011 the African-born population increased 39 percent to 128,000, although other estimates suggest that many more are living here without legal residency.

“They’ve been doubling every 10 years since 1980,” said Kim Nichols, an executive director of the African Services Committee, which is based in Harlem. “There’s a more established family and community network here to come to.”

Some come as refugees, some with work visas or special skills, many to stay and others to hone their talents and eventually apply them back home.

PhotoWorshipers, including many from Africa, at the Holy Fire Dynamic Word church in the Bronx. CreditDamon Winter/The New York Times

The yearly flow can be affected by wars and epidemics.

“They’re a self-selected population,” Ms. Nichols said. “They have to be the most ambitious and have the means to get here — at least one plane ticket — and a fearlessness about coming to a new place.”

She recalled a boy who was 13 and fluent only in Soninke when he arrived alone from Mali after his family had finally scraped together enough money to pay for his airfare. The young man, now 18, just got his green card.

“His parents saved everything for years to buy a plane ticket,” Ms. Nichols said. “They have this dream. They’re dirt poor and the only way their kids are going to get ahead is to get them here by hook or crook.”

An analysis of the Census Bureau’s latest American Community Survey, which ended in 2012, found that 30 percent of African-born blacks in the city had a college degree, compared with 22 percent of native-born blacks, 18 percent of Caribbean-born blacks and 19 percent of the nonblack foreign born.

Immigrants like Mr. Bojang and Ms. Amare say they still identify more as African than as black or African-American.

“Many black immigrants do not identify with the historical experiences of discrimination encountered by blacks in the United States,” said Kevin D. Brown, a law professor at Indiana University’s Maurer School of Law.

Two generations removed from colonialism and legal segregation, said Dr. Khalil Gibran Muhammad, director of the New York Public Library’s Schomburg Center for Research in Black Culture, “the younger African immigrants tend to be less consciously ‘black’ and are somewhat reticent to link their fates with the history and contemporary protest traditions of African-Americans.”

“Selma doesn’t exactly cut it for them,” he said.

Dr. Muhammad, recalling the shooting by the police of Amadou Diallo, an unarmed immigrant from Guinea in the Bronx in 1999, and of Michael Brown, an unarmed teenagerin Ferguson, Mo., last month, said color still trumped place of origin.

“Diversity among African-descended communities remains a black box and a mystery to most Americans,” he said. “Where public safety is concerned, black is all that matters.”

Mr. Bojang, who hopes to study law here after graduating from City College, said it might seem paradoxical that young Africans, who centuries ago arrived in chains, now dream of coming to America — but largely because the educational and economic opportunities are so much better than back home.

“So, if you look at the factors in place and contrast that with the conditions of the continuous struggle of the African-Americans for economic and social justice, it will be an error in judgment to say that the U.S. is becoming the Mecca for Africans.